The global financial crisis has squeezed property prices, but how has it affected those at the very top? 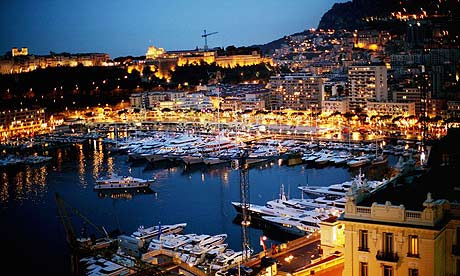 Monte Carlo home to the most expensive square metre of real estate in the world. Photograph: Graeme Robertson

Avenue Princesse Grace in Monaco is the most expensive street in the world, with each square metre in an apartment setting you back £73,000 – or about the same as a 70-square-metre apartment on the seafront in Hastings, according to Dow Jones' Wealth Bulletin.

But the palm-lined street, named after the Hollywood star Grace Kelly and popular with Russian oligarchs, is suffering from "la crise du credit" like everywhere else. The bulletin shows top prices paid for apartments, are down by 37% from 2008's peak of £116,000 a square metre.

Overall, prices paid for prime residential property in the world's fanciest locations have fallen by 12% over the past year, although Europe fell less sharply than the US and Russia.

Via Suvretta in the Swiss ski resort of St Moritz was the only street on the list where prices for top properties have risen since 2008. Prices are up by 18% to around £27,500 a square metre.

The world's second priciest street, the Chemin de Saint-Hospice, is a 20-minute drive along the coast from Monaco, snaking through on Cap Ferrat. It numbers just 15 houses, commanding beautiful Mediterranean views.

According to Wealth Bulletin, local estate agents say there is one property for sale on the street, but it is being sold privately and its price a closely guarded secret. It estimates that property on the street goes for an average of £61,000 a square metre.

New York's Fifth Avenue pips London's Kensington Palace Gardens to third place in the survey, with apartments selling for around £44,000 a square metre. Although a 400 sq/m apartment overlooking Central Park on the Upper East Side of Fifth Avenue sold for $29m in June, local agents say the market has come off the boil, and remains affected by a lack of supply

Fourth-placed Kensington Palace Gardens is Britain's most exclusive address, best-known as London's embassy row, including the Russian delegation. Prices in the street are estimated to have fallen by 15%-20% over the past year.